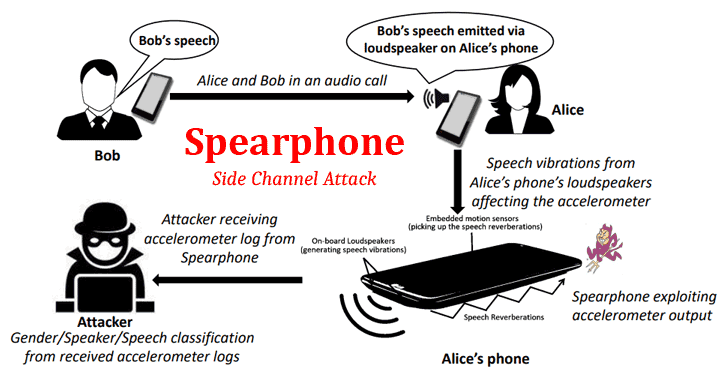 Earlier this month, The Hacker News covered a story on research revealing how over 1300 Android apps are collecting sensitive data even when users have explicitly denied the required permissions.

The research was primarily focused on how app developers abuse multiple ways around to collect location data, phone identifiers, and MAC addresses of their users by exploiting both covert and side channels.

Now, a separate team of cybersecurity researchers has successfully demonstrated a new side-channel attack that could allow malicious apps to eavesdrop on the voice coming out of your smartphone’s loudspeakers without requiring any device permission.

Dubbed Spearphone, the newly demonstrated attack takes advantage of a hardware-based motion sensor, called an accelerometer, which comes built into most Android devices and can be unrestrictedly accessed by any app installed on a device even with zero permissions. An accelerometer is a motion sensor that lets apps monitor the movement of a device, such as tilt, shake, rotation, or swing, by measuring the time rate of change of velocity with respect to magnitude or direction.

Since the built-in loudspeaker of a smartphone is placed on the same surface as the embedded motion sensors, it produces surface-borne and aerial speech reverberations in the body of the smartphone when loudspeaker mode is enabled.

Discovered by a team of security researchers—Abhishek Anand, Chen Wang, Jian Liu, Nitesh Saxena, Yingying Chen—the attack can be triggered when the victim either places a phone or video call on the speaker mode, or attempts to listen to a media file, or interacts with the smartphone assistant.

As a proof-of-concept, researchers created an Android app, which mimics the behavior of a malicious attacker, designed to record speech reverberations using the accelerometer and send captured data back to an attacker-controlled server.