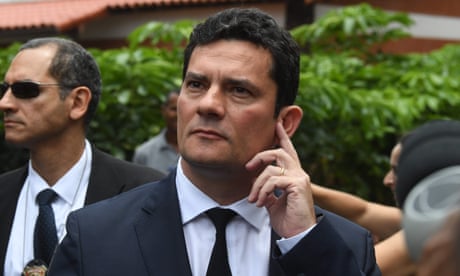 Brazil has been rocked by allegations that a prominent judge repeatedly collaborated with prosecutors during high-profile corruption investigations – including the controversial case that imprisoned former president Luiz Inácio Lula da Silva.

According to the Intercept, Sérgio Moro gave prosecutors strategic advice, criticism and tips during the sprawling corruption investigation known as Operation Car Wash that jailed hundreds of executives, politicians and middlemen.

Prosecutors also allegedly discussed strategies to block a newspaper’s attempts to interview Lula during last year’s election campaign, according to the Intercept, which published cellphone chats it said it had received from an anonymous source.

Opinion polls had indicated that Lula was likely to win the 2018 presidential poll until he was imprisoned and forced out of the race. His last-minute replacement, Fernando Haddad was beaten by the far-right candidate Jair Bolsonaro – who then appointed Moro as justice minister.

Lula has been imprisoned since April 2018. He was handed a nine-year prison sentence in 2017 by Moro, who ruled that he received bribes from a construction company in the shape of a seaside apartment renovated for him.

On Sunday, the Intercept published excerpts from what it described as an “enormous trove” of group chats on the encrypted phone app Telegram, along with audio, video and other documentation.